Understanding T-cell activation as a powerful mechanism for fighting cancer

A T-cell is a subtype of white blood cell, also called leukocyte which are the cells of the immune system that are involved in protecting the body against infectious disease and foreign invaders. T cells can be distinguished from other lymphocytes, such as B cells and natural killer cells, by the presence of a T-cell receptor complex (TCR) on the T-cell surface which helps to activate both the cytotoxic T-Cell (CD8+ naive T cells) and also T-helper cells (CD4+ naive T cells), therefore turning them into activated "killers" of foreign invadors. The commonly used binding site for T-cell activation is called CD3 (Cluster of Differentiation 3), a component of the TCR complex, responsible for TCR-mediated signal transduction, activation and tumour-cell killing.

These activated T-cells play a central role in provoking an immune response that does not involve antibodies, but rather involves the activation of the body own immune cells which are these antigen-specific cytotoxic or activated T-cells, and the release of various cytokines and chemicals in response to an antigen - a molecule capable of inducing an immune response on the part of the own patient body. 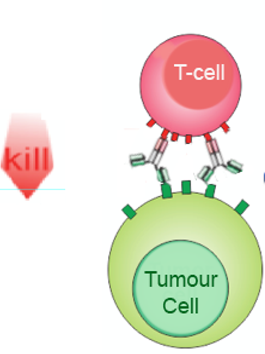 When a tumour antigen found on the surface of tumours and a T-cell can crosslink with an activating T-cell surface molecule such as the T-cell receptor complex (TCR) via the CD3 function, it can create an “immune synapse” between the target antigen on the tumour cell and the T-cell. This anti-CD3 binding induce (any) T cells to release granzyme and perforin from CD8+ cytotoxic cells, proteins which directly lyse tumour cells, or promote T-cell proliferation (CD8 and CD4 T-cells) and secretion of cytokines (mainly TH1 response, such as IL-2, TNF-α and IFN-γ).

Targeted tumour cell killing is dependent on the presence of the multi-specific cross-linking antibody, and importantly in terms of therapy, this immunotherapy recruits all available T-cells regardless of their actual TCR specificity (i.e. they don't actually need to be cancer targeting T-cells, but just simply T-cells floating around in the blood due to a flu or an occasional infection, all of which become activated as cytotoxic T-cells and are directed to the tumour in order to kill it as that is the cytotoxic T-cell natural function.

Biotecnol Tribody™ molecules do just that. They crosslink T-cells with tumour antigens via the CD3 effector function expressed in the T-cells, in order to kill the tumour.

By clicking this link, you can see a Tribody™ engineered with an anti-5T4 tumour antigen which is expressed in Triple Negative Breast Cancer cells and an anti-CD3 antibody which is specific for T-cells. The anti-5T4 antibody binds the 5T4 antigen expressed by the tumour and the anti-CD3 binds and activates the circulating T-cells,  directing them to the tumour, provoking the lysis of the tumour cells.